beej67 said:
The source I mentioned above has instilled some faith in me, more than I would have had otherwise anyway.

But the hire was awfully öööö divisive. Roof needs to realize that coming in, and prepare for it. Maybe someone who knows him could chat about that to him to give him an idea what sort of Sweetingstorm he's walking into.
Click to expand...

Beej, Teddy doesn't care what people will think of him. He will come in and work his A$$ off with what he has, go out and get some recruits that we might not have gotten. I say give him time. I'm just sad that I'm going to be in Charleston on Saturdays and not "On The Flats" watching Teddy run the defense.

That was a really good read, actually. The conclusion: Roof has coordinated defenses with very sub-standard talent to above-average important statistics (although worse-than-average yards and points), so with a decent bit of talent at PSU, the writer thought he'd outperform (which he did). 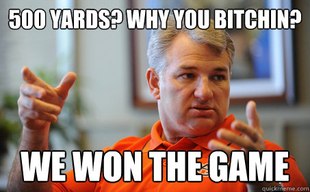 First things first, I don't like the hire, but let's take a look at his career as opposed to rank speculation and conjecture.

He was first a DC at Western Carolina in 1997. I don't think it's really fair to judge that as part of his body of work, but if you do his defense wasn't bad. The most they gave up all season was 30 points, ironically to Paul Johnson and Ga Southern. Otherwise, he gave up 28 points (loss to ETSU), 25 points (win v. the Citadel), 24 points (loss to Chatt). The rest of the games the defense held the other team to under 20 points, including a shutout against VMI. WC was terrible that year, breaking 20 points only three times, so the offense wasn't doing him any favors. Overall, a pretty decent defense although I don't think he gets much credit for it (positive or negative).

Overall, the defense arguable improved every year he was here from 1999 to 2001.

I liked him a lot at Duke (and was up in the area when he was coach). Even though his teams were terrible, he seemingly recruited good there (for Duke at least). For instance, in 2005 they landed a 5 star DT, a 4 star DE, and a (can't believe I'm typing this) 4 star kicker. That's on top of 8 three star guys (which for Duke is a lot). Similarly in 06 they landed a four star DE and a four star RB and had 9 three stars. 07, Roof's last year, they got 7 three stars. Roof was fired from Duke on November 26, 2007. Before then, for the 2008 class, he had another commit from a 4 star CB, and four more 4 stars. Renfree committed in January, but I don't know how big Duke was on his radar while he was committed to us.

When he was DC at Duke (arguably all that's relevant), they improved from 113th to 58th nationally in total defense from 2001 to 2002. Roof was basically promoted to head coach because of how decent the defense was.

In sum, actually looking at the numbers I don't think he's as bad a hire as I thought he was. He stunk up the joint at Duke and Auburn. But he's shown capable of producing a top 30 defense with us and UCF. I don't think we will end up with stellar defenses, but I like his aggressive nature (hopefully will lead to stops, which is really what we need) and his hire should translate into much better LB play. I'd maybe give it a B-.

This needs to be said.

I HAVE A SOURCE, WHO IS CLOSE TO TED ROOF AND ALSO CLOSE TO TECH FOOTBALL, WHO LIVES NEAR ME (may have given the source away) who told me once that Ted's bad years under O'Leary were because O'Leary was overruling him on game strategy. All those games where we did "4-3 base defense" with no adjustment even when it was failing miserably were supposedly O'Leary's doing. According to this source.

I would like to punch your source in the face.

I like the hire. For those of you that don't get over it and pull your panties out of your vag.

33jacket said:
if you have a better method let me know.
Click to expand...

Are you kidding me? Did you even read his original post?

Again, not commenting on the validity (although it certainly sounds like a very reasonable measurement), just pointing out what was said.

Roof I don't believe ever coached a down at UCF. He was hired, then left to be DC at penn st when BOB was hired.

he has had only 2 good years of defense on his resume i can see, and penn state was a good defense he inherited....
L

BuzzCzar said:
the poster likely meant the "plurality" of years, meaning his longest stint in any one job in those 14 years was as HC for Duke; which is true


for those that blame George O'Leary for Roof's mediocre at best performance during his first stint at GT, why would Roof go be his DC again for UCF in 2011? Doesnt really make sense if Roof didnt like the way it worked under OLeary, huh?
Click to expand...

Why would O'Leary hire him again if he blamed Roof for the poor performance at GT? Doesn't really make sense, huh?

If Roof was constantly overruled by O'Leary, why was he going to coach at UCF before getting the PSU job?
L

I would buy tickets to see the outcome of that misbegotten punch.

Auburn held Oregon to 19 points in the BCS title game two years ago. That's doing some work.
I'm not wild about this hire, but I'm willing to see how it plays out.

Deke said:
Are you kidding me? Did you even read his original post?

Again, not commenting on the validity (although it certainly sounds like a very reasonable measurement), just pointing out what was said.
Click to expand...

hoss using any method over roof's career shows he is a mediocre at best coord.

Diseqc said:
If Roof was constantly overruled by O'Leary, why was he going to coach at UCF before getting the PSU job?
Click to expand...

Maybe he realized his mistake?

You don't hire someone twice because you think they are bad.

I know some other posters have listed the stats, but I figured I'd look up as many stats as I could to try to make me feel better about this hire and compile them all together. These numbers are going to be from his time as a DC only.

It should be worth noting that Minn had the worst defense in FBS in 2007. They won 1 game in 2007 and went 7-5 in 2008. So while those numbers aren't exactly stellar they are a huge improvement from the year prior.

What I take from this is that Roof is aggressive on D to stop the run but doesn't seem to be too great at stopping the pass. While I think this is the approach Tech needs to adopt to win games, aggressive D that can pressure the QB and stop the run, I'm not sure I like Roof as the coach.

What was it you said to Jeff Schultz?

What was it you said to Jeff Schultz?
Click to expand...

See my sig ...
You must log in or register to reply here.
Top